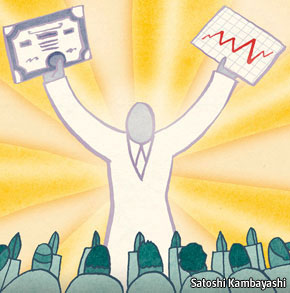 Finance even has its own high priests in the form of the analysts and fund managers who promise their clients heavenly rewards if only they listen to their advice. They preach regular sermons in the form of brokers’ notes and quarterly reports, and they house themselves in vast cathedral-like buildings that dominate the skyline. Each day also has its canonical hours as traders pray for profitable opportunities at the European, American and Asian market openings. Finance has its annual calendar, too, marked with festivals known as results seasons in which the lucky participants receive their temporal (rather than spiritual) dividends.

And like any self-respecting religion, finance has its doctrinal schisms as well. Active fund managers are a bit like the medieval Catholic church, offering eternal salvation to those willing to pay the appropriate sum, which are known in modern parlance as performance fees rather than indulgences. The active-investment sect has its elaborate rituals and language, with a liturgy (“information ratios” and “alpha generation”) as baffling to the layman as the Latin mass was to the medieval peasant. Clients are supposed to listen to their presentations in a reverential hush, trusting that all the mumbo-jumbo will deliver superior results.