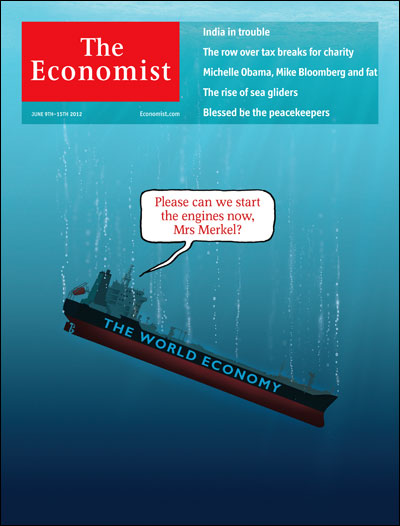 Against this storm stood a remarkable woman, Angela Merkel, insisting no quick fix was available. She has been proved right. Steady work and steely brinkmanship have carved out for Greece the biggest ever writedown of government debt, in a sophisticated and complex deal.

Economists warned politicians not to dither. In the New York Times Paul Krugman poured scorn over Europe’s politicians, collectively, in terms that, had he used them about say, black people, he would have been all but up for incitement to racial hatred. What was needed, it was argued, was more “firepower”, higher “firewalls” and bigger “bazookas”, with no delay.

The implication of these calls for bold action was simple: Greece was in effect bankrupt; governments, notably Germany, would one way or another have to pay up if they wanted to save the euro. Ms Merkel’s line was different. Yes, Greece was bankrupt, but the solution was that Greece would carry as much as possible of its own debt, that private bondholders would be made to write down as much as possible, with speculators punished, and that other governments and the European Central Bank would contribute as little as possible.

David Glasner hadde en god post om Ringens noe spesielle innlegg. Mens Ringen konkluderer med “One lesson is clear: beware the experts who come bearing advice and in particular economic experts“, Glasner oppsummerer “No, the lesson that is clear is to beware of politicians and sociologists unable to grasp the laws of arithmetic and compound interest“. Indeed.

They fell victim to an exaggerated confidence in themselves. Most of us in the social sciences are aware of our limitations. Economists, for their sins, have worked themselves into a frenzy about being “scientific”. Overconfidence leads to hubris. The economists let their guard down.